A Scanmaskin World Series Concrete Grinder, your ultimate floor grinding and polishing machine. They are designed and build to make life easy for the operator, the hard work is done by the World Series grinders for concrete and stone floors alike. High performance without fuss.

Would you invest north of 20.000 Euro in a concrete grinder because it has a cup and phone holder?

Or would you invest that kind of money in a floor grinding machine that is so balanced that tilting back the 640kg machine is easy , even after a long day?

Because it has an interactive smart display that takes the guessing out of choosing the correct diamond tool set? And it warns the operator for excessive tool wear before it is to late? In real time, all on the DSP screen?

Would you buy it for its perfect tuning of weight-power-torque, so it always gives ultimate performance even of very abrasive floors?

With a simple function to increase grinding head pressure by 60kg without adding weights?

Would you spent so much on a machine that needs only 3 screws removed to separate the grinding head from the rest of the grinder?

That is so Low Maintenance that it needs its belt replaced only after 5000ohrs or 5 years? Yes FIVE YEARS!

And because it has a BELT that won’t slip! Yes the drive belt will not slip as it has teeth what is called a cog belt. You now like Swiss Alps trains!

Scanmaskin World Series concrete grinders will give you all the above and much more!  Simple, robust quality as we have come to appreciate from cars and machines made in Sweden. From one of the oldest manufacturers of grinding, polishing and floor preparation equipment. Scanmaskin since 1975.

The World Series Concrete Grinder (s) are available in 28″ and 32″ sizes, in Manual or Remote Control electric powered or as Propane powered for total freedom in and out doors!

Designed, engineered and build in Sweden from components made in Sweden. Top quality concrete grinding machines that deliver the concrete floors your customers expect. The World Series by Scanmaskin the professional grinders DreamMachine.

The video shows the options available on the Remote Control unit and the ease of use with the RC or with the wired Joy Stick. 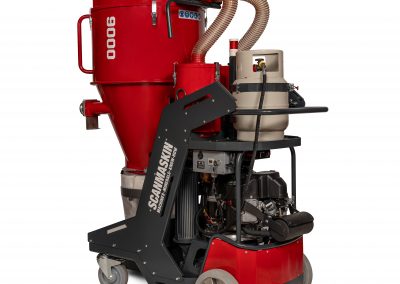 Do you dread to have to access the planetary housing?

Not with the World Series 32 easily remove three screws only, it’s all you need to do to separate the planetary from the machine, child’s play!

How to get the full benefit from the front wheel? See video above.

1. Lift the planetary for easy transport.

2. Need more or less grinding pressure? Just shift the weight from the grinding head to the front wheel or back with the hydraulic pump. Giving you control!

Do you need more “bite” while grinding? See video above!

No problem, just use the release function on the rear wheels and pull them backwards and you gain up to sixty kilogram in tool pressure. World Series it’s that simple!

Not sure you’re using the right diamonds?

That’s what the interactive DSP screen is for! Push a few buttons and voila, ready to go! Even a novice can get it right!